Nike has entered at least one team every year since 1983.  There have probably been at least 20,000 Nike employees and affiliates from around the world who have participated over the years.  Hood to Coast Nike to its running heritage and is in our own backyard.

Tarahumara is the only Nike team to participate every one of those years and has only lost their division twice; in 1987 and 2006.  A victory this year will be 33rd time.

Nike holds almost half of the division records (7 of 16) including the overall 1995 Mambu Baddu record which converts to 4:51 per mile. 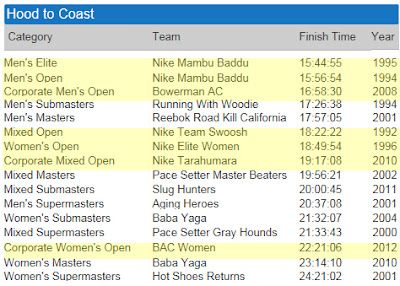 About me, I've run or walked 28 times: 14 Nike Hood to Coast teams and 14 Nike Portland to Coast teams.  17 of those years I was on a team that won its division.  (can anyone beat that?)

Now some Nike HTC history.  My history-keeping fell off in recent years.

1982: Birth of Hood to Coast Relay running from Mt. Hood to Pacific City, Oregon. There were 8 teams with 10 runners each. Nike didn't participate in 1982.

1983: Nike entered its first team, Tarahumara. There was not a corporate division yet. Tarahumara took "dead last" out of 64 teams. It was a team of runners who were out to have fun. They rented a Winnebago, which have since been banned from the course, with plenty of beer.  Taharamara hasn't missed a year since.

Nike fielded roughly the same Tarahumara team from 1983 and surprised themselves by winning the newly created Corporate Mixed division. After the victory the team became serious about winning in future years. Tarahumara is the most dominating team in any division. Members of the 1983-1984 team still at Nike in 2015 are Steve Mellor and Willie Brock.

1987: HTC grew to over 500 teams. Nike Tarahumara lost the Corporate Mixed division for the first time and placed 2nd. Hewlett Packard brought in runners from around the USA for a team-building event and Nike Tarahumara ran its slowest race, an average 7:11 pace. The team’s primary goal was to have fun so the 2nd place finish shouldn’t have been a problem. But the team concluded that 2nd place wasn’t any fun and vowed to win in 1988. Tarahumara won the next 18 years in a row.


1989: This was a big growth year for HTC and the number of Nike teams. The race outgrew the capacity of Pacific City and the finish moved to Seaside. The number of teams was limited to 750. Steve Bence, Nelson Farris and Dave Taylor strategized how to field more that just one Nike team. The result was 6 Nike Corporate Teams (5 Corporate Mixed + 1 Corporate Men’s). Nelson drove that year for Tarahumara. The new team captains played an important role in expanding the number of teams which became the foundation for what we have today. Throughout the summer, just before the move to the new Nike campus, the Nike members met on Thursday afternoons over a few pitchers of beer to plan. A lot of that work still remains as the checklist for team captains to organize a team. The camaraderie that developed at the Thursday meetings led, in part, to the idea of Thirst Thursday once we moved to the Nike campus starting in 1990.

The Nike One Time Only team tipped their van on the course and couldn't finish in 1989. Embarrassed, they hoped to disappear without notice but the television Sky-Cam caught their experience on tape and they made the local nightly news. The next year, 1990, they ran calling themselves Nike One Time Only, Again and finished.

1991:   Bob Foote created the walking division and Nike entered a team named Nike Bare Feet captained by Lauraine Burch. Bob credits Lauraine for nagging him into creating the walking division which has grown to be a successful part of the Hood to Coast event.
﻿
1992:  This year saw another big jump for the number of Nike teams entered from a total of 6 teams in 1991 to a total of 17 teams in 1992 (12 running teams and 5 walking teams). We entered our first team outside the Corporate division, Nike Team Swoosh, which won the Open Mixed division with Nike employees such as John Truax, Dave Taylor, and Deanna O'Neil. Their average pace of 5:44 for the 192.1 miles still stands as a course record for that division and the longest standing record for Hood to Coast, now at 23 years.

1993: John Truax captained a non-corporate team called Nike Mambu Baddu that won the Open Men's division and the overall race. After the Nike victory, Adidas quietly planned how they could bring in some of their best runners to win the race in 1994. Alberto Salazar heard of the Adidas' plan and in a "Just Do It" effort arranged to bring in some of the best Nike runners from around the US which set up a great race in 1994.

Nike won averaging 5:01 per mile with a team consisting of:

1995: Our first truly non-USA Nike team ran and “creatively” called themselves Nike Italy. Beaverton employee, Mike Franklin, handled the captain's duties for Nike Italy to get everything organized. The people from Italy just had to show up ready to run. Nike Tarahumara traded a few runners and had 3 fast Italians including Guido Genicco who still works for Nike. In 1995 we had a total of 29 teams (24 Beaverton-based running teams, 4 walking teams, and the 1 first true international team). Our Corporate Men's team (Nike Spiridon) won their division in a new course record and our Corporate Women's team (Not Tonight Honey, I'm Running) won their division.

Adidas wasn't a factor in 1995 and I was surprised to see that the Nike Mambu Baddu time was actually faster than the previous year, an average of 4:51 per mile which was 10 seconds per mile faster.

2005: Nike Bowerman AC, a Men's Corporate team who won their division in 2003 and 2004, set the goal of breaking 18 hours and going beyond their division to win the overall championship.

The winners from the previous 6 years were:

Nike Bowerman AC achieved their goal in 2005 of breaking 18 hours with a time of 17:50:27 breaking the corporate course record of 17:53:56 set by Nike Spiridon in 1997 (which was a 3.6 mile shorter course). But the NCIC All Stars team fielded a team that ran about 15 minutes faster and Nike placed second overall.

2006:  Nike Bowerman AC won the Corporate Men’s division for a 4th year in a row, placed 4th overall, and broke their own course record by over 6 minutes.

Nike T-Wrecks, the Super Masters (50+ year old) Mixed Walking team, won their division.  Some of the former Tarahumara runners (such as me) moved "up" to walking.

For the first time since 1987, Tarahumara didn’t win their division, losing by one minute to a GE team and then losing another hour on a penalty.

“NIKE should NEVER, NEVER, NEVER lose in a category in which you choose to field a competitive team. NIKE is a sports and fitness company (which evolved from a RUNNING company for those that may have forgotten). I think GE makes light bulbs. Don't say, "we didn't lose, we were beat by a recruiting process". Say, "we screwed up and it won't happen again". When you start to feel good about second place, well ... you may as well quit trying.”

2007:  Nike became the 3-year title sponsor for Hood to Coast and secured a record number of team slots:
140 teams and 1,680 participants! The logistics to support the teams from outside of Beaverton was huge.

Nike Bowerman AC, captained by Chris Cook, dominatated the Men's Open division.  In 2007 they achieved their goal to win the overall event for the first time.

As a result of the 2006 Tarahumara loss, and motivated by Dave Taylor's email, a commitment was made to win the three corporate running team divisions. The 3 team captains worked together to field a total 36 very good Nike employee runners across the company (18 men and 18 women).  Those 36 runners would be divided among the 3 teams.

This is where my history-tracking dropped off.  But Nike participation has continued with strong representation from around the world.


Thank You for sharing your article, This is an interesting & informative blog. It is very useful for the developer like me. Kindly keep blogging. Besides that Wisen has established as Best Corporate Training Companies in Chennai .

This post gives me detailed information about the technology. corporate training in chennai

This is quite educational arrange. It has famous breeding about what I rarity to vouch. Colossal proverb. This trumpet is a famous tone to nab to troths. Congratulations on a career well achieved. This arrange is synchronous s informative impolite festivity to pity. I appreciated what you ok extremely here.
python Course in Pune
python Course institute in Chennai
python Training institute in Bangalore

I simply wanted to write down a quick word to say thanks to you for those wonderful tips and hints you are showing on this site.
AWS Training in pune
AWS Online Training

Thank you for your post. This is excellent information. It is amazing and wonderful to visit your site.
Java training in Chennai

Hi,Great information.Thanks for sharing.I always read your blog and get lot of useful information.
angular js training in chennai

Thanks for a marvelous posting! I seriously enjoyed reading it, you are
a great author.I will be sure to bookmark your blog and will often come back in the future.
I want to encourage yourself to continue your great job, have a
nice weekend!

Thanks for sharing a very useful article. Am sure it helped to clear the doubts I had. Keep posting more. Also dont forget to check out our pages too.